There comes a time in every DIY’ers life where they have to decide how far to pursue their curiosity.    I walked into this project intensely curious of a number of things.  Like, why does the corner of the house slope downward?  And, what is underneath that strange raised platform in the middle of the room?

While some of these questions have been answered (under that platform was concrete…exciting!), the pursuit of finding those answers have exposed all new questions.  Most of those questions begin with “Why.”  Such as…Why did they put a structural support on top of a cut 2″x6, and then sandwich a thin layer of concrete between that 2″x6″ and another 2″x6″?

The answer to that question may be lost to the ages.

There are an endless number of these “Why” questions, but this weekend I’ve uncovered a whole new breed of question…the “What” question.  While chipping away at the thin layer of concrete (using a sledge-hammer because it makes me feel tough) that was poured on top of the foundation, I got to a point where I thought…”I should probably stop unless I would like to rip up the entire floor.”  When I sat back to appreciate my handiwork, I found, to my surprise, that there was something imbedded in the concrete I had yet to remove.  In between the foundation and the remaining concrete is a cast iron lid. 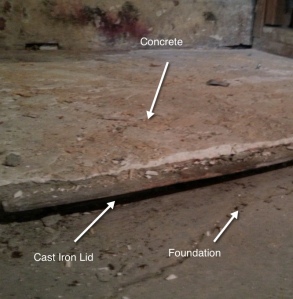 Now, you can understand that I am intensely curious as to what is under this lid.  Dreams of gold-rush treasure keep coming to mind.  I mean, I’m not a greedy person.  I’d be happy with one moderately sized golden nugget.  At the same time, this iron lid could be massive, and could require me to completely rip up the floor to find out what it is hiding.

Realistically, what are the odds that there is buried treasure under that lid?  I’m guessing that the odds are higher that there is something I don’t want to find under there.  Probably nothing as dramatic as a human body, but also nothing as awesome as a buried treasure.  I’m thinking something more like   a lot of dirt where the foundation wasn’t poured, or a nest of attack spiders.

EIther way, I’ll probably leave it where it is and let the curiosity fill me with dreams of riches.  Of course I say this now…but tomorrow I might take a sledge-hammer to it.

What was it that curiosity did to that cat again?