Here’s the room after the demolition:

After opening up the walls and part of the floor I’ve made a few discoveries.  First, let’s talk about that wooden floor:

What I found was that half of the floor is covered in a sub-floor, under which is a concrete pad.  This is good news.  I’ll take out the old sub-floor, which has redwood directly on top of concrete, and put in a new sub-floor with pressure treated wood & a vapor barrier.  This should also help me make one level floor, verses the multi-level floor that I currently have.

What I also found was that the second half of the room does not have a sub-floor.  Instead, the person who built this space glued asbestos tiles to, what I believe, is the same concrete pad that on the other side of the room is covered with sub-floor.  I’m not totally sure about this yet because I need to have a professional take out the asbestos tiles.  That will be happening this week so i can reassess the situation.

On a side note, what I’ve learned about asbestos during this process has been quite interesting.  Apparently, asbestos tile is one of the less harmful forms that asbestos comes in.  The asbestos is actually encapsulated in the tile, so the only way it would become air born (and thus dangerous) is if the tile is broken.  Also, asbestos was used quite freely back in the days of yore, mostly because it simply doesn’t burn.  It is a great insulator and fire retardant.  With that said, for my own comfort, I have decided to have it removed by a professional. 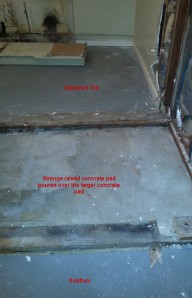 Finally, as you can also see in the picture above, there is a strange concrete pad in the middle of the room that was poured over the other concrete pad.  I have no idea why this was done, but it will have to be removed.  That is, after I have my structural engineer take a look.

As for the rest of the room, there has been no limit to the surprises I’ve uncovered.  Just so this stays within the boundaries of “blogging” and not “novel writing,” I’ll limit my breakdown of some of these treasures.

In the picture below you can see that the drywall had been installed directly over the siding from where the house use to end.  They even covered up an old window with all of the working parts still in place.. 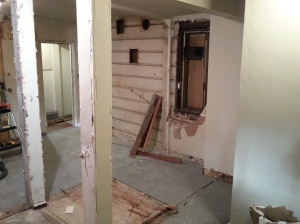 In this picture, you can see where the old kitchenette use to be (along with some of those asbestos tiles).  You can also see where some mold has grown behind where the sink use to be.  Luckily the mold is just on the surface of the wall, and not growing through the drywall.

The best surprise was discovered after I opened up the wall behind the kitchenette.  From the looks of things, there is no structural support holding up this corner of the house.  Installing a new beam will definitely be something I’ll have to bring in a professional to do.  Much of this wood is rotted, so it may end up being more of a wall rebuild then I had anticipated.  We will see what the structural engineer has to say once he checks it out. 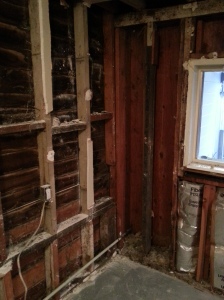 That’s it for now.  I’ll let you know what happens next in this adventure!